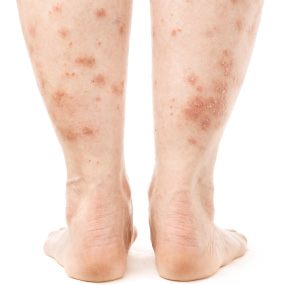 Often found on the knees and elbows, psoriasis is a skin condition that results in silvery scales and red flaky skin. Around 2% of Americans are affected by psoriasis at some point in their life. Psoriasis often affects individuals who are less than 35 and the severity of the condition varies greatly f case to case. Some people only experience a mild irritation whilst psoriasis has a severe impact on other’s lives. While psoriasis is a chronic disease, most sufferers will experience periods of severe irritation and followed by period where psoriasis symptoms are barely noticeable.

Psoriasis is the result of skin cells being produced too quickly, leading to a build-up of skin cells. This is due to T-cells accidently attacking healthy skin cells and thus encouraging more skins cells to be produced in the deepest layer of the skin. While it is not currently known why the T-cells attack healthy skin cells, it is currently theorised that this is due to environmental triggers or possibly genetics as in most cases those who have psoriasis have a relative who also suffers from it.

There is range of treatments available to treat psoriasis which can be broken down into three types of treatment: topical medicine, light therapy and oral/injected medicine.

If you have severe psoriasis or psoriasis that has proved resistant to other types of treatment, you are likely to be prescribed drugs, either oral or injected, to help combat the condition. As these drugs tend to potentially detrimental side effects, they are usually only prescribed for a short amount of time.

Light therapy is a type of therapy that uses ultraviolet light, natural or artificial, to help treat psoriasis. Indeed, studies have revealed that short-term exposure to sunlight can help improve psoriasis as it can slow down skin cell turnover. However, it is important that you do not spend too much time in the sun as it could lead to worse symptoms and long term damage.