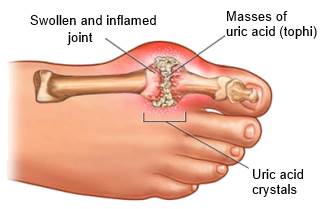 While gout can affect any joint, most sufferers experience gout in their big toe. Gout is significantly more prevalent in men than it is in women. This is because the oestrogen that accompanies a woman’s menstrual cycle increases the excretion of uric acid through the kidneys. Gout tends to trouble men over 30 and women over 60.

There are two parts to managing gout: dealing with the immediate symptoms and preventing future attacks.

The treatment of gout varies on the severity of the case. Most people find relief in anti-inflammatory painkillers and applying a cool compress to the affected joint. However, in some cases this is not enough and sufferers are prescribed stronger steroidal anti-inflammatories. When experiencing a gout attack, it is important to rest and avoid knocking the affected joint.

While these treatments may relieve the painful symptoms until the attack passes, gout is usually reoccurring. There are several ways by which individuals can reduce their chances of experiencing another gout attack.

To begin with, there are some lifestyle changes that gout sufferers can make to reduce the amount of uric acid in their body. This includes avoiding foods which are high in purines, such as offal, seafood and products made from yeast extract. It is also wise to avoid certain alcoholic drinks like beer and stout which contain a lot of purines. In addition, losing weight is another great way to reduce the uric levels in your blood and thus reduce the chances of another gout attack.

However, in most cases your doctor will prescribe you some long-term drugs which can safely help lower the amount of uric acid in your blood. Not only will this prevent any new sodium urate crystals from forming but it can also help dissolve any existing crystals.